We are pleased to announce that the Confluence Meta RPG is going to be part of Team WV Fox’s Extra Life charity gaming marathon. We will be running the new scenario “The Trouble With Heroes” and providing exclusive cards for your characters. These sessions will be broadcast live on twitch and recorded for the Maximum Pew Pew podcast. We will also be providing a second FATE core game: The Secrets of Cats.

Admission is a minimum $15 donation at the door. Donations made to Team WV fox ahead of time count to this admission.

We are at the Charcon Bonus Round today with a new adventure and Card set to collect. If you want to get started early, here’s the checklist! 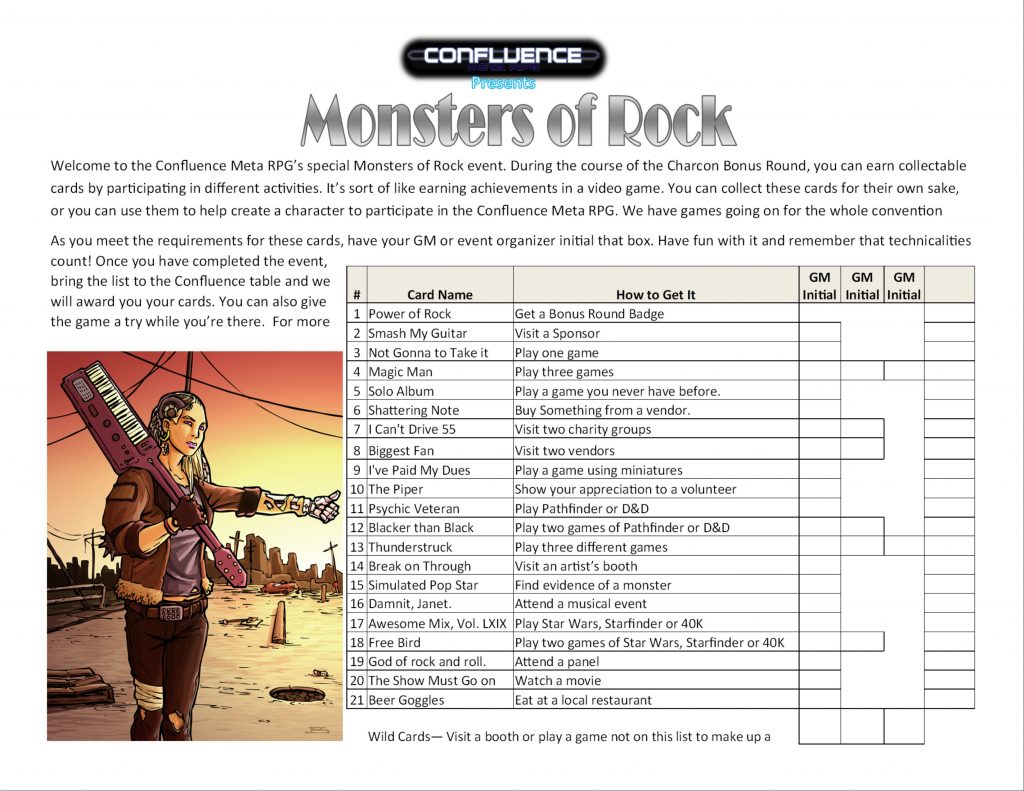 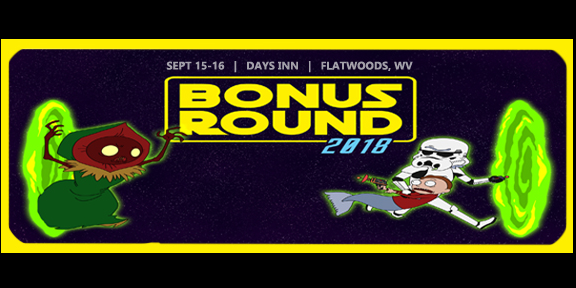 Are you ready to Rock? We are. With convention schedules changing it’s been way too long since we last ran the Confluence Meta RPG, but it’s time! On September 14th and 15th we will be at the Charcon Bonus Round in Flatwoods, WV. We couldn’t be more excited.

Bonus Round has some great new things going on this year, including the first Flatwoods Monster Music Festival and so our theme for Confluence will  be Monsters of Rock! We will have a full set of new cards to earn in our meta game and a brand new RPG scenario where your team will engage in a battle of the bands to determine the future of Confluence City.

We look forward to seeing you there!

Oh, and here’s a teaser card. 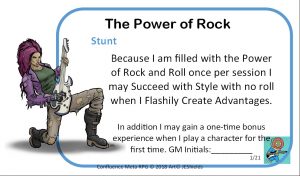 It’s time for Charcon 2017 and we’re excited to bring a new meta game to the Confluence RPG. Someone has murdered our beloved Travis Reynolds and it’s up to Confluence Players to determine who did it. Like the famous board game we have a selection of suspects, murder weapons and locations. As the participants earn cards, they also find clues that can be used to solve the mystery. In addition to clues some cards will let the players discover what the other players have found during the final reveal on Sunday night.

In addition to the meta game, we have two new scenarios to play:

Red Shirt Blues: While on a mission for the USS Charcon, the players find themselves in the middle of a mystery and the crew are the suspects. Can you deduce who the killer is before they strike again and further endanger the mission?

A Knight in Noir: A priceless relic from True Earth has been recovered. It’s the player’s job to see it safely to Confluence City. A task that would be a lot easier if it wasn’t stolen before you arrived.

It’s going to be an exciting weekend and I hope to see you all there! 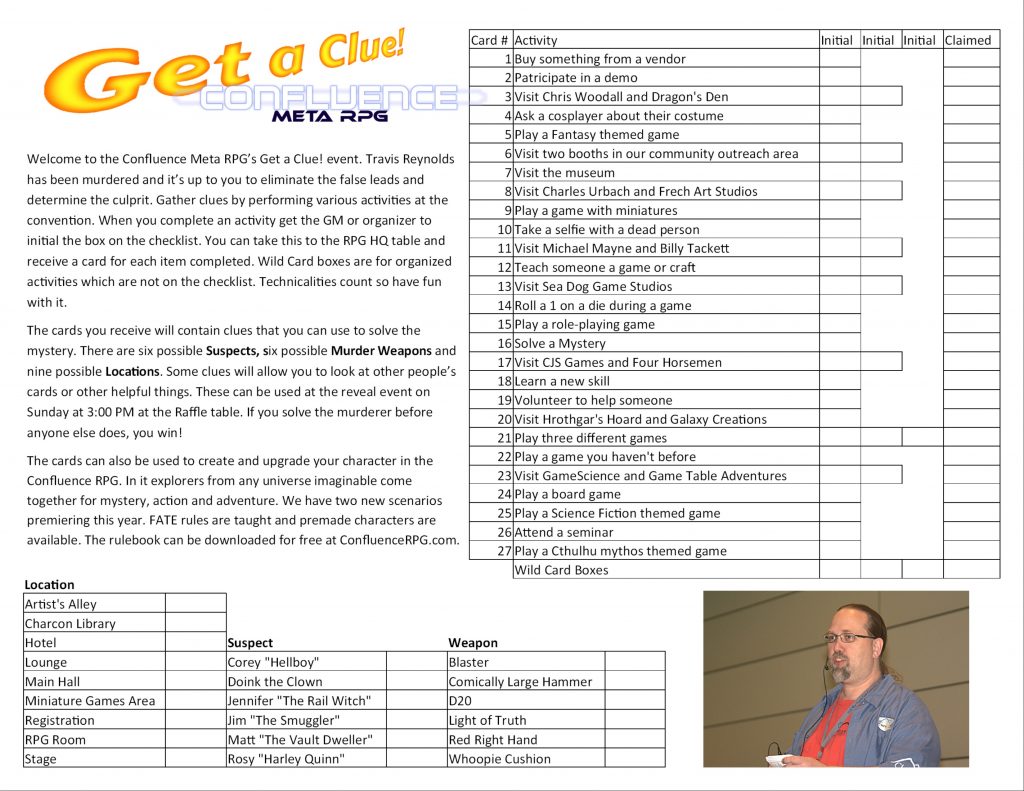 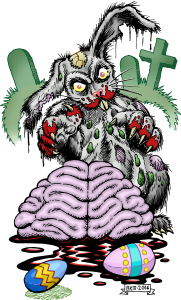 It’s Spring already!  It’s been quiet here, but we’ve been working on big plans for this year. The Confluence Meta RPG is going to be in full effect at the following conventions. Cards, new adventures and special events are coming.

Both of these conventions are right around the corner, so make your plans and reservations right away!

Oh, and the bonus, well in keeping with the holiday spirit, we have an Easter Zombunny card that you can download and print. This companion is a delightful combination of terror and spring cheer. The stunt needed to bring this companion with you can be found in our beta edition rule book in the downloads. 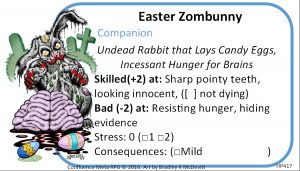 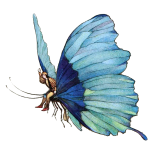 The Confluence Meta RPG is coming home to Charcon with the full Confluence Experience. We will be premiering multiple new adventures for our players as well as over four dozen new cards to collect. Our theme this years is Fairy Tails and explores the darker parts of the multiverse where sane explorers rarely go. Fight monsters, perform a heist against the queen of witches and more.

Charcon is in Charleston, West Virginia from October 14-16, 2016. Registration Information can be found at Charcon.org. We even have a preview of a card that will be printed in the brochure. Feel free to print and add to your collection. 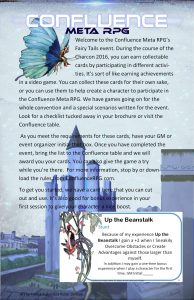 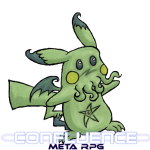 Shout out to Sarkany Studios!

Last weekend we conducted our first full roll-out of Confluence at the CharCon Bonus Round in Flatwoods, WV. It was awesome to see all out hard work in action, and people having fun with it. The success of the card mechanics were especially gratifying. The vendors who participated noticed the additional traffic we were sending them and the players really enjoyed collecting unlocks for their characters.

From the player side, all of our tables were well attended and everyone seemed to enjoy themselves. A highlight for me was running the Flatwoods Monster Investigation for Andrew, who is a member of the Braxton County CVB and an expert on the monster’s lore. He has contributed a number of photographs which will appear in the published version of the scenario.

Our Sunday special was an experimental PVP tournament, which saw our most eager players battle it out for a chance to run a custom made companion card. It was a series of tight battles and the players brought all the tricks to the table, including a few that I never envisioned. When all was said and done, William Bumgarner beat out four others to become our victor. He had us create a phoenix companion for his character. He alone will only have access to it, so if you want one of his four copies, make your offer good. 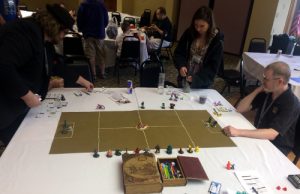 A shot from the Cryptid Collectors Tournament 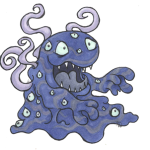 We will be at the Charcon Bonus Round in Flatwoods, WV. We will have a full set of cards to collect and new adventures to play. Flatwoods is the home to the famous Braxton County Monster and we will feature it and a number of other monsters in the Cryptid Collectors set.

So download the rulebook and make your character then join us at the convention. We will teach you the rules and have a good time!

You can find more information at https://www.facebook.com/events/1677888015801633/. and preregister at https://securusworkshop.com/constellation/convention/bonusround2016.

We’ve included the brochure insert for Bonus round here so you can see what cards are available and how to go about getting them. 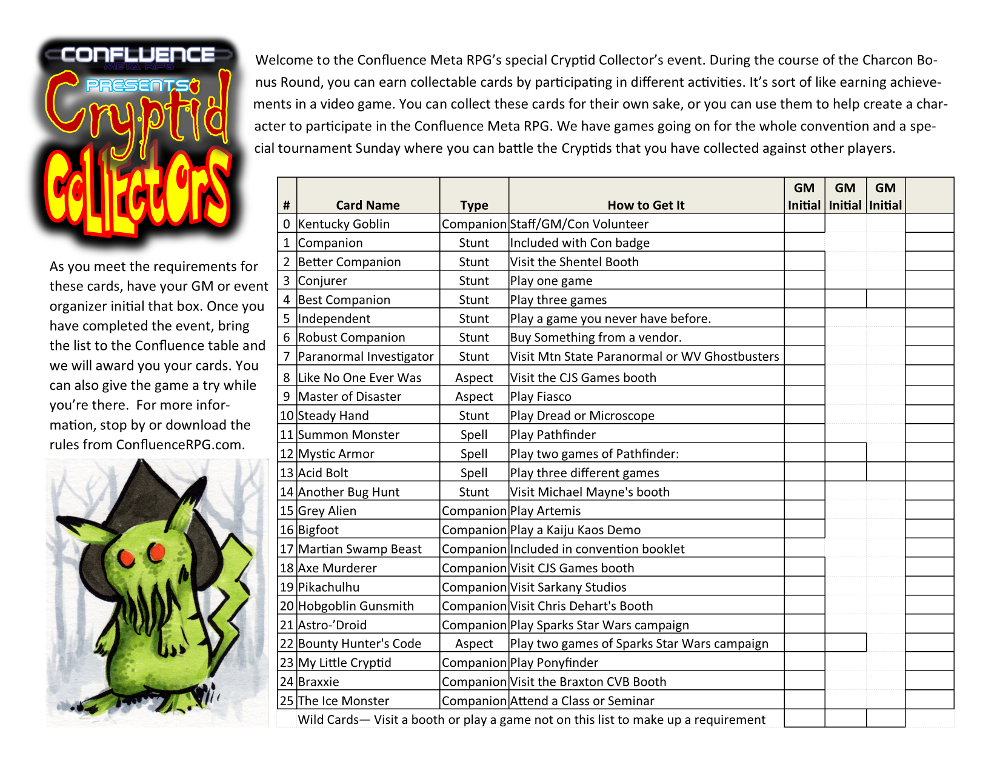 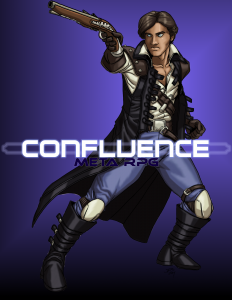 This is an exciting time for those of us bringing you the Confluence Meta RPG. With this post we officially go live with a new website, and more importantly, the first public version of our beta rules. Click on the ol’ download link above to get to our download page.

I’d like to give a shout out first to all those who helped us write this thing. I’d like to thank everyone who played at the various events in the year and a half leading up to this point. I’d like to thank my fellow CharCon staff members who instigated this and supported me running with it.

It’s been a lot of work, and there’s still a lot left to do, but it’s been rewarding. Let us know what you think, and come to one of out events and play. We also have plenty of ideas for adventures and universes to explore. As long as you’re interested, we will do our best to keep stuff coming.